Nellore is the sixth most populous city in Andhra Pradesh. Nellore is the administrative headquarters of Sri Potti Sri Ramulu Nellore district. The ancient name of Nellore was "Vikrama Simhapuri". It is located on both sides of the Penner River and is well known for its aquaculture, agricultural products and agricultural businesses.

Nellore came under the state of Andhra Pradesh on 1st November 1956 when the states were reorganized on a linguistic basis. Nellore had been highly influenced by the Aryan invasion and later by the Mauryan rulers.

Mekapati Rajamohan Reddy of YSR Congress Party is the Member of Parliament from Nellore and N. Janardhana Reddy is the Sitting Member of Rajya Sabha from Nellore. 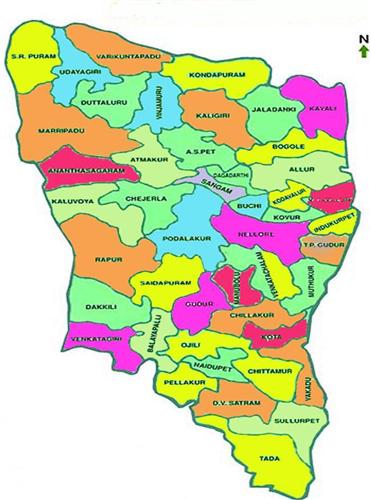 There are 10 state assembly constituencies in Nellore namley Allur, Atmakur, Sullurpeta, Gudur, Kavali, Kovur, Udayagiri, Nellore, Sarvepalli, and Venkatagiri. There are three seats in the Parliament of India from the district and they are Nellore, Tirupati and Ongole. Apart from the 10 state assemblies, there are 46 Revenue Mandals, 12 Agriculture Sub Divisions and 5 Revenue Divisions, namely  Nellore, Kavali, Naidupeta, Atmakur, and Gudur and 1204 Revenue Villages (among these revenue villages, 1135 are inhabited) in the district. There are 968 Gram Panchayats and one corporation, Nellore ,in the district . Other than the Nellore Municipal Corporation, there are 6 Municipalities namely Kavali,  Venkatagiri, Gudur, Naidupeta, Sullurpeta and Atmakur present in the Nellore district.

Nellore Municipal City Corporation is the administrative body of the city looking after water, sanitation and town planning.